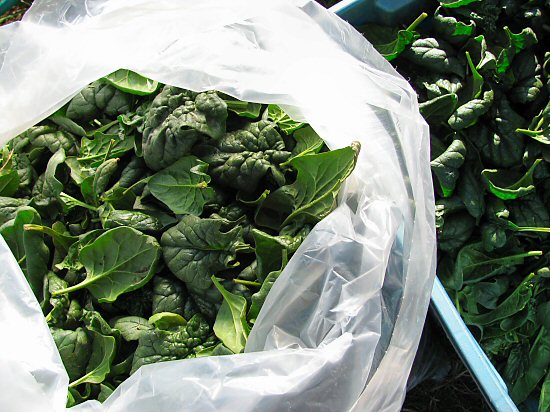 So this is it for the season’s spinach, a last 18lbs (8kg) of Spargo, unfazed by many subzero nights and all sorts of up-and-down weather antics. Spinach is one of the great ones for cold-climate tiny farming, easy-going once it gets started, tough under freezing conditions, and always in demand… The deer that’ve been lurking and circling the field all year have started to come in for an exploratory nibble here and there, working their way in from the edges. At this point, it’s slim pickings! They discovered one edge of this final, late-planted, slowly-growing spinach patch a couple of days ago, so we (Lynn, Steve, and I) grabbed the rest this morning.  Between us and them (mostly us!), the spinach is done!