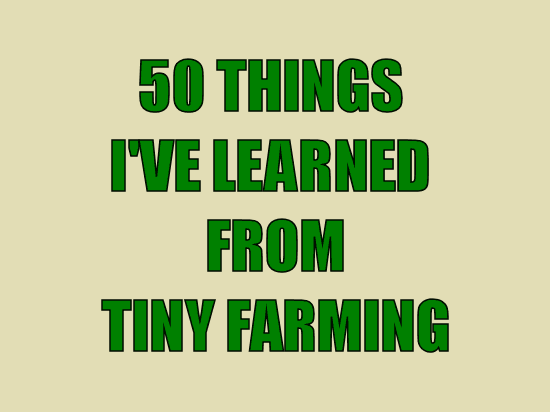 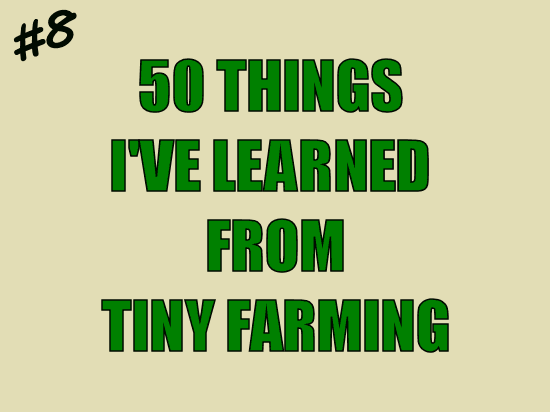 #8 – Remain calm: In tiny farming, you can indulge WORRY to the max. You can really work yourself into a frenzy. It’s usually about, well, the weather, people, money (specifically, stuff that has to be paid for), time, people, and…the weather. In that order. The big factor in outdoor farming that’s NOT present in a lot of lives, particularly when you’ve been living a largely indoor urban existence, is the DAILY effect of the WEATHER. Or really, Mother Nature in general: bad weather, disease, deer eating all your lettuce, zombies, all of the destructive things that an overwhelming, out-of-your-control force can deliver, just like that! Thinking about the possibilities can be…stressful, and that’s not to mention dealing with a tidal wave of so much to do, so little time. The COOL thing about farming: over time and your share of intense worry, you notice that things come and they go. You plant your crops over and over again, and here and there they get eaten before their time, and people sometimes fail to meet…expectations, money may get tight, deadlines get blown, but it’s all really not terminally terrible. If you’re still there, and the land is still there, you keep moving ahead, because that’s the game! The simple arc of the farming year makes obvious exactly where you are at any time, and what the next step is. Farming is unpredictable, but it is not fuzzy, there is always a clear result, one that you can hopefully, and usually, eat! So really, just keep farming and you will become increasingly calm as it sinks in by example that A) You really don’t have THAT much control, and B) It generally works out anyway. Sooner or later you’ll realize, the easiest thing to do is just…remain calm. :)