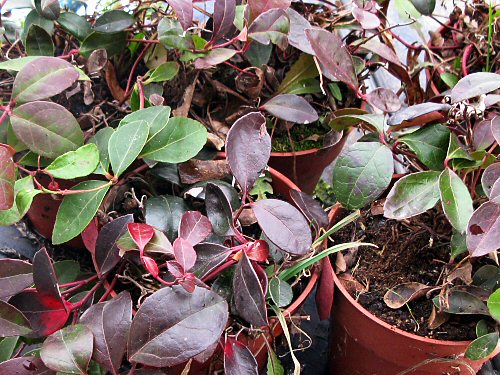 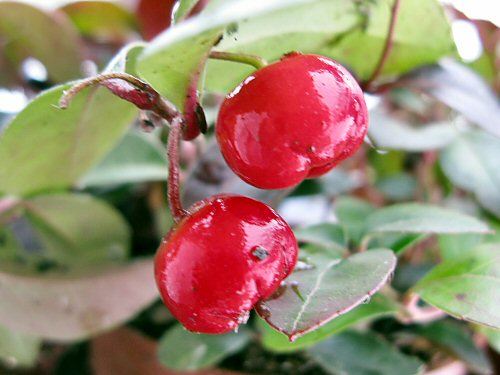 These guys are pretty impressive in the low maintenance department, definitely the toughest, hardiest potted plants I’ve known. They arrived out of the blue last January, about 20 of them. After a bit of coddling under the fluorescent lights along with the spring seedlings, I set them outside in front of the Milkhouse, and there they’ve sat, untended, in 4″ (10cm) plastic pots, for the last seven months. In recent weeks, they’ve been basically frozen solid in their pots for much of the time.  And here they are, leaves glossy, setting a couple of berries… Cool!

What are they? Wintergreen (Gaultheria procumbens), aka teaberry, a small, creeping evergreen shrub with minty, wintergreen-tasting berries (the leaves and stems can be made into a medicinal tea, and the plant also produce wintergreen oil, used as a flavoring). They’re healthy, but they’ve only set a couple of berries amongst the remaining six plants (I gave away the rest). Hmmm… I’m comfortable with the many varieties I grow of 40 or so veggies and herbs, I’m still getting used to several varieties of a dozen types of cut flower, and I’m working on ID-ing ALL of the various grasses and weeds around here. WINTERGREEN is barely on the map… So many names, so much to know…! UPDATE: Case in point… Thanks to comments below, these guys were properly identified, I’d thought they were winterberry… I’ve corrected the post!