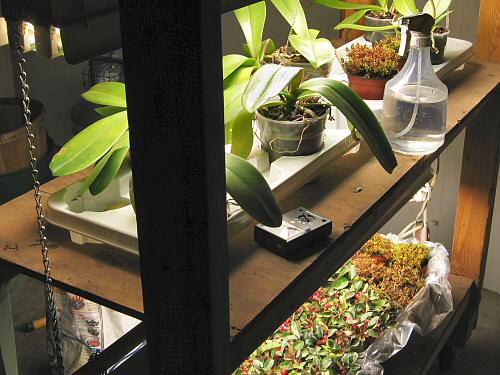 Grow rack lights went on today for the first time this season. They’re only for the rescued houseplants (orchids, wintergreen, heather)—I guess every plant deserves a place in the sun—but, I’ll be starting super-early lettuce soon, a month earlier than ever, for an experiment in planting them out to the greenhouse at the beginning of March. Getting the grow racks ready is another familiar routine. In early summer, I remove the fluorescent light fixtures and the chains and dowels they hang from and store ’em somewhere (last year, it was on the new Big Shelf). For spring, I dust them off, wipe them down, hang them, and a new seedling season begins!