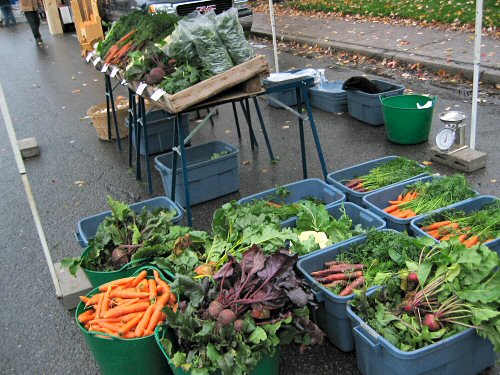 Au revoir to the farmers’ market!

A great last day at the market! We were packing in the rain at 6am, drove in through a drizzle, and by the time I was set up just after 7, the rain had stopped! Despite the dreariness, it was quite warm. So far, so good. I didn’t particularly expect a big turnout, and was happy to find two and three people waiting at a time for a good deal of the peak fall hours, from 9:30-11:30. In the pic, it’s around 8:30, few people around as the weather sorts itself out, time to drink coffee and wander around a bit to chat. Soon, a steady stream of mostly regulars. It’s hard to explain the pleasure I get from this part of the people equation, so at this point I won’t even try. Growing food for people and delivering it directly is simply…great! The stand set-up didn’t change over the season as intended, it’s pretty barebones as it’s been from the start. I’m already renewing plans for a new and improved version for next year. On we go!

Published in Market & Stand and Veggies