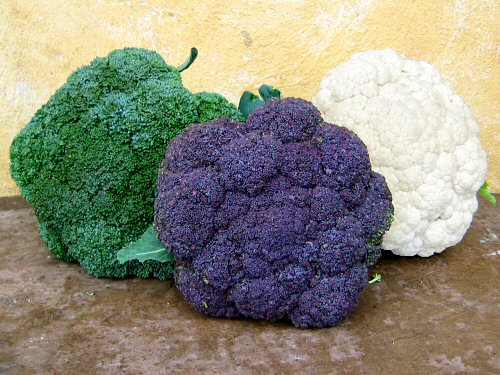 One broccoli (Early Dividend), one cauliflower (Early Dawn), but what’s that Violet Queen in the middle? The EDs are standbys, the VQ is new. It looks like broccoli, cooks like broccoli, tastes like broccoli, but it’s in the seed catalog as a purple cauliflower?! The VQ were transplanted really late, and I didn’t actually expect to see a harvest from them. But they showed up recently, and a couple of days ago, Bert, who buys lots of veggies here, saw them and decided to try a couple. “They’re broccoli,” he said. “Um, I believe they’re…cauliflower,” I said, while for the first time looking closely at ’em. “Don’t argue with him, Bert, Mike knows what he’s talking about,” said Helen, his wife. Last night, we steamed some for dinner. BROCCOLI. Today, I harvested samples for a formal close look, but really, there’s broccoli and there’s cauliflower, it’s not hard. Broccoli. Next, a call to the seed house, where extremely knowledgeable head man Bill assures me that it is…CAULIFLOWER. It beads up more than some varieties, he says. So, I’m confused. It may not sound like a big deal, and it’s not at this time of year, but it does point up yet another aspect of market gardening: knowing what you grow. LOTS of talking about veggies goes on every market day, and I NEVER say things just for the sake of it. I name varieties, explain when I’m very familiar with a particular veggie, or when it’s new to me…honest conversation, although it’s “sales talk” as well. And people trust you to…know stuff. Anyhow, I just looked up Violet Queen online, and it’s indeed, apparently, cauliflower. I’d swear it’s broccoli, and I’m pretty positive that you would, too! Maybe I’ll grow more next year, for when I feel like sounding like a lunatic! :)

18 thoughts on “Broccoli vs cauliflower”

Early July: Weather OK. No good rain for weeks now, but not crazy hot. Deer once again at bay, but there's a marauding groundhog this season. For the full story, you can start back in January.