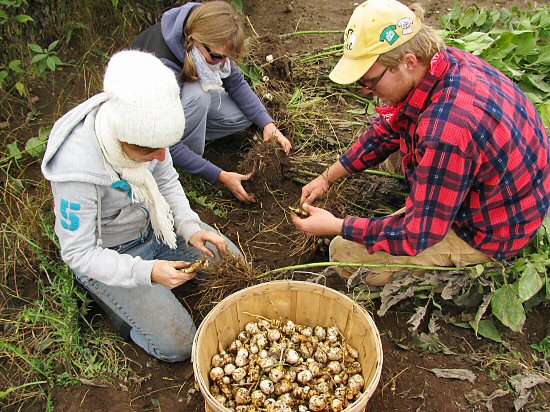 For tomorrow’s farmers’ market, Lynn, Andie and Jordan harvested more of this year’s Jerusalem artichoke. The tubers have gotten noticeably bigger since pulling some just a couple of weeks ago… Chokes are a really simple, satisfying harvest, at least, when you pull up the plants in their first year. These guys are spaced at 12″ (30cm), so we just grab the usually multiple stems at each spot and tug. The main root ball is shallow and contains most of the tubers: pull ’em off, and bang the root clump a bit to get at the ones in the middle. You also have to scrabble around for maybe a hand’s width or two past the little root crater to find a few extra outlying tubers—guess that’s where the “invasive” part of choke lore begins, they do try to spread. Overall, though, it’s quick and easy, especially when the fall weather is mild like today. Nice!

Published in Fieldwork, Harvest and People