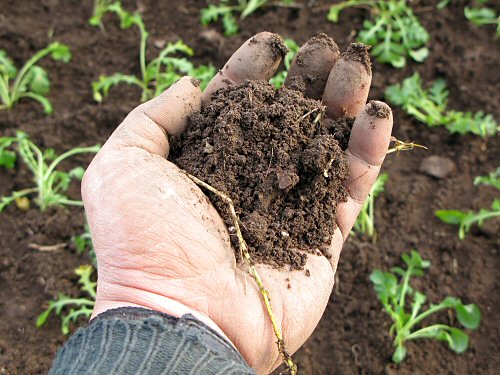 Transplanted the arugula from the end of January into as small a corner of the greenhouse as seemed to make sense, two plants to a plug, about 6″ (15cm) apart. There’s no space to waste, and these guys, already a long time in trays, will likely be ready too early for market (first Saturday in May). So, another experiment in early planting, but leave room for others! The arugula has been out there in the plug sheet for a couple of nights, surviving 10°F (-12°C) nights under a few layers of row cover (an extreme rapid hardening off!; as you can see in the tray, a few much smaller seedlings, started in mid-Feb, didn’t do so well, most of ’em got toasted the first night). And now, the survivors are in the ground, free at last, in full sun during the day, and recovered at night. It felt great to put hands in the soil, first time this year. Mmmm…