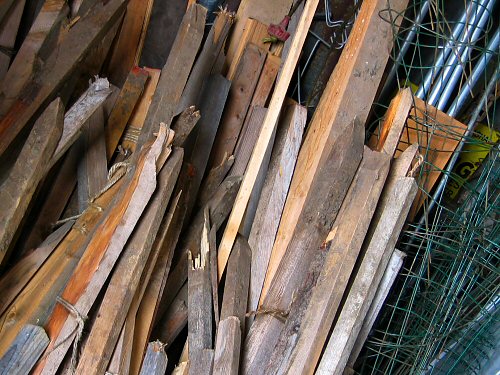 Every year so far, there’ve been two or three major projects that I’m sure just HAVE to be done. They’re usually EXPENSIVE (at least, expensive in the world of tiny farm finances!), which means, they take some thought. We’ve had the seedling greenhouse, excavating the pond, the Milkhouse Extension, the tiny tractor, the first full-time field hand (Conall!), and a few other steps… So far, so good. For the coming year, I have in mind a few more…important upgrades. I was reminded of one of them in the drive shed today, where the stakes used for my semi-effective semi-sprawl method of tomato support are stored, along with some of the couple hundred (largely useless) home-style tomato cages. For a while, I was dreaming of moving up to the basket-weave method—lots of twine and…weaving—although I have a hard time picturing all of that suckering getting done. What I REALLY want is BIG CAGES made from concrete reinforcing mesh…but it seems so expensive. Rough pricing: about $7 a cage times 500 cages, plus a fair bit of labor setting them up and taking them down. I know the method works well, but will it work well HERE, this year? Is it worth the money? For the same cash, I could almost build a second, production-size greenhouse. Or put more into drip irrigation. Or build a cooler for better short-term storage. Come to think of it, does growing dozens of varieties of tomato really make sense, couldn’t I just sprawl two or three big, round red varieties that would be easiest to sell…? In fact, I could grow a lot more of a lot less, cut out many varieties and entire crops, concentrate on the trendy best sellers, and get on the waiting list for an upscale farmers’ market in the big city. Top dollar! Maybe try for a bank loan for a bigger tractor (hey, there’s more acres in the garden field!) and a refrigerated truck?! If this is a (tiny) farm business, that seems to make sense: GROW! Yet somehow I’m heading in the OTHER DIRECTION. Stopping the city CSA to go local. Trying more crops and varieties every year and figuring out ways to buy stuff for them, like big tomato cages… It seems so…contrary. Which, in tiny farming, is something I guess you gotta like!!

7 thoughts on “Stakes vs cages”