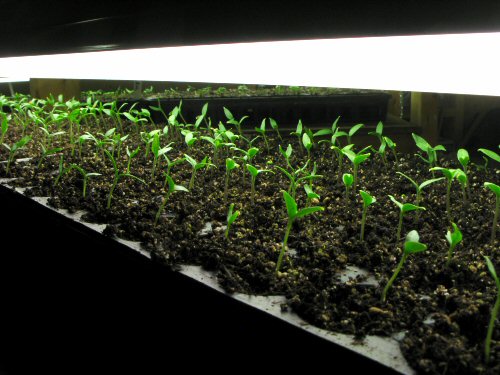 Around 10 days since they first appeared, a little over two weeks from when they were seeded, and the eggplant are doing fine. A few of them already sport the tiniest first true leaf. I imagine they’re as hungry for light as any of the veggies, but eggplant are a little more restrained than some others when it comes to stretching: where every millimeter farther from the light counts, there’s not that much difference between the edge of the tray and the center. It’s kind of intense, the little details you track when you’re raising seedlings under fluorescent lights. Even the eggplant lean isn’t too extreme… These are two of the three 72-cell trays of eggplant for this year. Off in the distance, it’s PEPPERS!