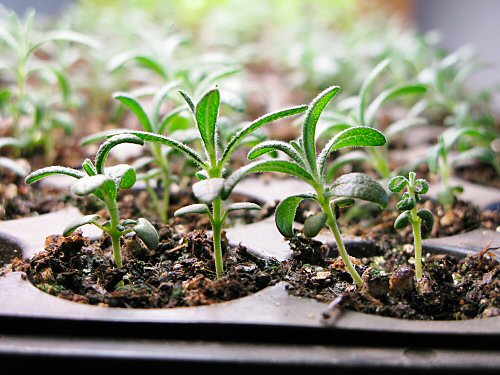 The main tiny farming action is with the seedlings now; even if the snow melted off tomorrow (which it won’t), it’d still take a sunny, windy couple of weeks, give or take, for the field to dry out enough to fully work. Indoors, with the new grow rack, there is still space, but there’s also quite a bit left to be started, including most of the tomatoes. And some of the seedlings are beginning to call out for MORE ROOM. The rosemary (above) did really well, germinating steadily over several weeks, to the point where there are up to four and five crowded in 1.5″ (3.75cm) diameter cells. And the celeriac (celery root; below), a trial crop this year and the only one started in flats not cells (I sprinkled a packet of seed across two fibre trays), is healthy, dense and stretching. Transplanting tiny seedlings is fun at first few, but can get tedious, especially if you have hundreds to do in a session. To save on time and tedium, I try to avoid potting up by sowing into final locations whenever it makes sense. One way or another, the trays inevitably start adding up, until there’s not enough LIGHT to go around. Into the equation, there’s the barely heated seedling greenhouse and the WEATHER: as soon as it’s reasonably warm enough at night, I can move the hardier stuff out—this month, at least every other night has dropped down to around 5°F (-15°C)… And that’s what this stage of the action is all about: adjusting lighting, timing and starting cell size and, as always, gambling on the weather…! 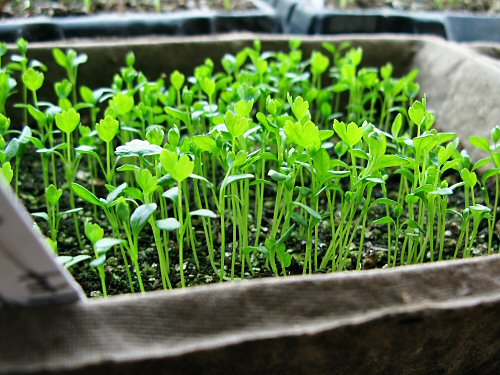