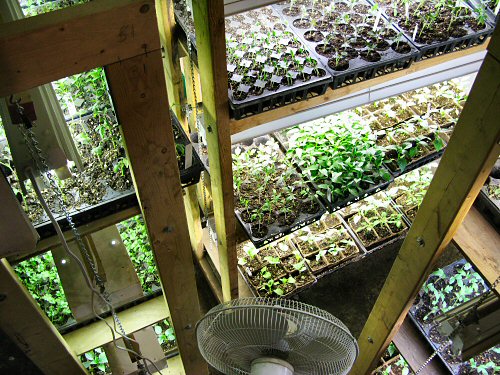 With the cold snap about to break, the final potting up is fully underway, a few days later than last year, but no worries. Even with the new, fourth grow rack, things are tight, with four trays to a shelf instead of the ideal two—better to give ’em all an equal ration of light for a couple of days until the first wave is out in the greenhouse, than leave some of them on unlit tables. At the same time, started the cucurbits: several varieties of cucumber and summer squash, with melons, winter squash and pumpkins soon to follow. The rain so far has been good, over an inch (25mm) in the last couple of days, and a bit more apparently to come. OK, cool. Then, bring on the heat!

11 thoughts on “Seedlings stack up”