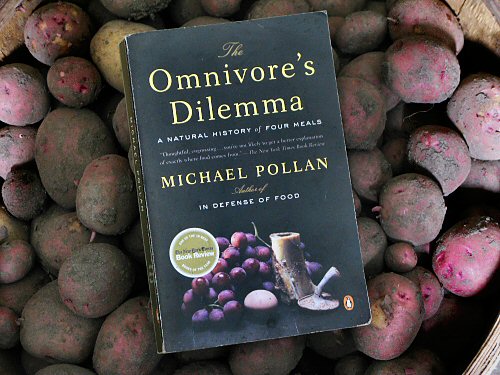 Since I mentioned buying this book a while ago, I might as well wrap it up! I recently, finally read Michael Pollan’s The Omnivore’s Dilemma: A Natural History of Four Meals, an investigative reporter’s full-on indictment of modern food. It came out in 2006, but with all of the praise and recommendation I’d heard from people around me and online, it almost felt like I was waaaay behind a life-changing, or at least, EYE-OPENING, experience. In fact, I’d read excerpts and heard Pollan speak on radio and TV, and I had a pretty good idea of what the book would be like: HIGHLY ENTERTAINING and densely packed with condensed bits of accessible scientific explanation, intriguing and disturbing facts, and involving eyewitness accounts. OD definitely delivered on all counts.

I read it over a couple of days, a real page-turner! For a week afterward, choice nuggets of often alarming info swirled in my head. And then, the details started to fade. It’s now a couple of weeks later, and a few choice bits remain. I really like the idea of being driven by the complementary opposing forces of neophilia and neophobia (kinda like the angel and the devil, sitting on each shoulder…), and that we humans developed big, powerful brains in order to figure out what to eat (something like that). The description of grass farming was absorbing. Mushroom hunting sounds…extreme! And so forth. Oh yeah, and we’re feeding ourselves crap!

The one big downside of this sort of intensely involving overview, covering so much territory in just 400 pages, is that you can’t absorb that much in a practical way. So, you’re entertained in an agri-suspense/thriller/horror style. The result: if you weren’t already convinced (I was…), you’re now likely quite certain that our food industry and the food it produces are both…horrifying (that’s not good!). You also hang on to some interesting facts that you didn’t know before, maybe stuff that you’ll go on to explore. And perhaps all this will fuel some significant personal action (that would be good).

All in all, OD is engagingly written edutainment, and I’d recommend it as a good read. As for its life-changing impact, the mileage no doubt varies.