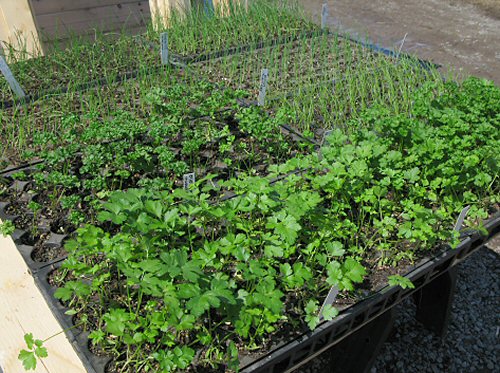 Man, what a difference a day and a bunch of degrees can make! The temperature didn’t exactly shoot up, but it went from hovering around daytime zero, to around 10°C (50°F). This was one weather trend, predicted on the 15-day-forecast weather site, that I figured wouldn’t suddenly go south (it’s gotta warm up sometime), so I’ve been waiting for it, to the day, for a couple of days now. It’ll get steadily warmer for a week or so, than maybe drop a bit, but even if we get another BLIZZARD, the ground will have warmed up enough that new snow won’t be able to stick around for long. So, I do believe, SPRING IS HERE!!! I woke up to sunshine, and without even checking the temperature or confirming the forecast, set up a table outside the Milkhouse and out went the leek, onions and parsley for a little rapid hardening off. Getting them out to the greenhouse in a couple of days will free up a lot of rack space! Wandering around the field a bit, checking the melt-off’s progress, I poked around the edge of the Jerusalem artichoke bed. The ground was still fairly frozen, and had melted to clayey muck only in spots. Poking around in a soft spot at the base of one of the plants, I came up with a handful! First harvest! The tubers look beautiful, the ones in the front of the pic about marble size, the biggest in the back, like a golf ball. As seed stock, there’s going to be a ton from the 45 pieces planted last year. I didn’t end up harvesting any in the fall; now, I’ll get to for the first time eat ’em! 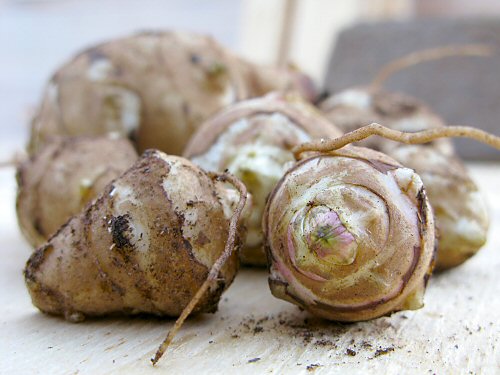