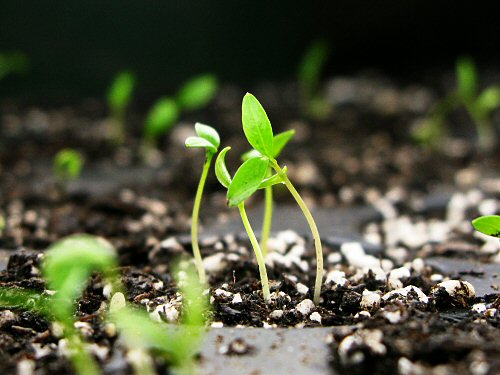 Parsley, seeded 11 days ago, began popping up over the last couple of days, so that’s the second crop of the season, underway. Four varieties this year, two each of flat-leaf (Plain Dark Green Italian, Hilmar) and curly (Forest Green, Green Pearl). They’re 18 cells per variety, in a 72-cell plug sheet, around 4-6 seeds per cell—I’ll eventually thin them down to two. They’ve already started to stretch because they’re sharing a light rack shelf where the lights are set higher to accommodate a tray of onions. Parsley is easy to start, I’ve had no problem with transplants, but my  seedlings have always tended to stretch and tangle in the trays before transplant time. Last year, I snipped them back quite a bit so they wouldn’t tie themselves to each other. They seem to like their light strong. These are just early season details that I won’t be much concerned with a little later on, but I’ll see what I can do. I’m gonna hang lights on another shelf for them right now!