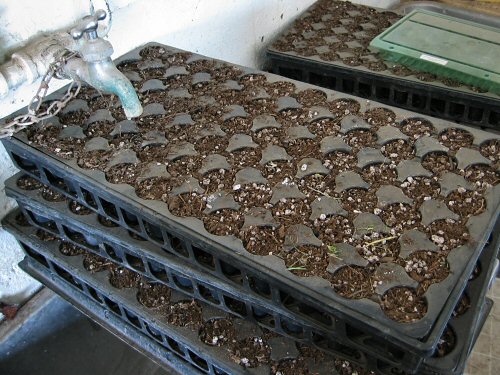 Return to the trays

These 72-cell plug sheets, filled with now bone-dry starter mix, have been sitting in the Milkhouse on one half of the double sink since early last summer. They were extras from the final round of seed starting (the last of the brassicas). Now, it’s their time again, as I start the set-up for next year’s seedlings. I usually only do this stuff after the Holidays, but this year, I’m unusually anxious to get going. Maybe it’s a reaction to the unexpected snow and cold. After the recent, freakishly short winters that happened to coincide with my entire farming career, maybe I’m edgy about being cut off from the garden for so long. I mean, all I see is white. I want more greens and browns!! (And there’s the new adventure in fine dining to get started, sparked by Amanda at Apartment Farm’s recent peppy post: “Winter Gardening: Micro Greens”!)