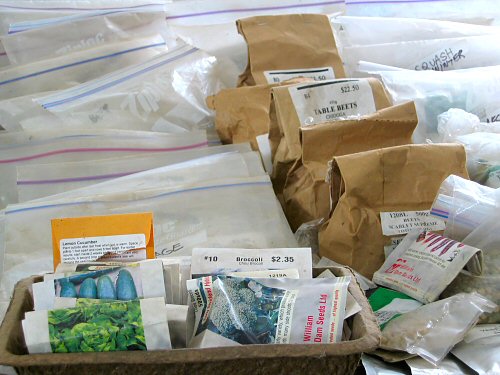 Keeping up with the early start, I got out the seed from its storage chest to take a look. With the tiny farm’s growing HISTORY (hey, Year 6, coming up!), keeping the seeds sorted for freshness is an ever more…serious consideration. Old seed won’t work, and there’s always lots of carryover from year to year. For this garden’s veggie selection, seed life in cool, dry storage conditions falls into three categories: nice and long (around 5 years, for brassicas, cucumber/squash family, lettuce, tomatoes,…), medium (around 3 years: beans, peas, carrots,…), and SHORT (1-2 years, for onions, corn, parsnip, parsley,…not too many here). Luckily, this is all book info, not gathered from painful personal experience! But I listen closely, ’cause one of my biggest garden nightmares is THINGS NOT GERMINATING… There are enough reasons why gazing happily on those newly seeded, semi-straight rows might be the greatest satisfaction they ever offer, and dead seed shouldn’t be one of ’em. My first germination test last year seemed to bear out the wisdom of others: normally-stored seed is not forever… So, it’s checking packs and taking dates!