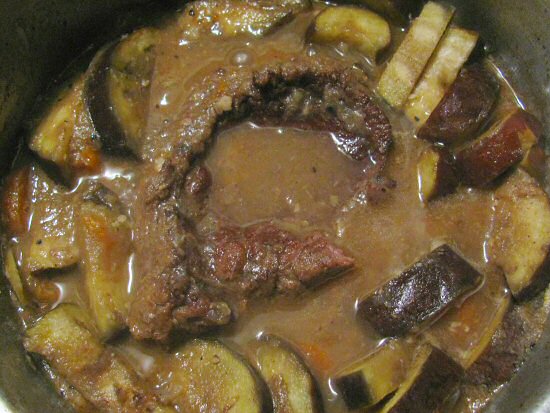 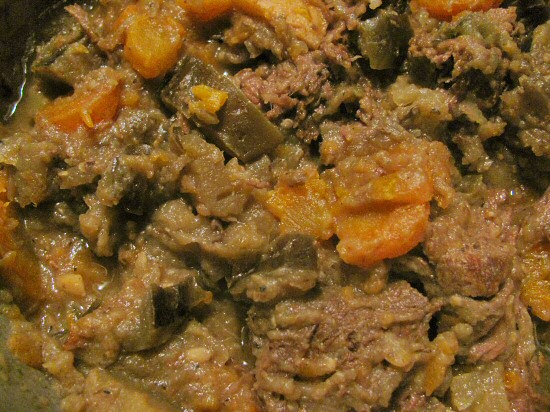 Another in my series of possibly-not-so-appetizing photos of oh-so-delicious food. Local food. Ingredients either grown by me or gotten from those who did. I still find knowing where your food comes from endlessly satisfying, it doesn’t get old. Anyhow, without further ado, on to the one-pot, no-culinary-skills-required Beef and Eggplant Stew.

Here are the ingredients and the method, all in one. Tossed in whole a piece of tough-unless-slow-cooked grass-fed beef (this cut was medallion), added onions, carrots, garlic, a Yukon Gold potato cut up small so it would dissolve and thicken, plus well-water and a little imported salt and fresh-ground pepper. Simmered covered for quite a while, maybe two hours—on the wood stove would’ve been fun, and efficient, but it wasn’t lit—then added the secret ingredient: EGGPLANT. This was purely an experiment, a few baby eggplant had been in the fridge for a while and needed to move along, so why not? I cut ’em up, skin and all, and in they went. Another fairly long simmer, covered, until the beef was shreddable with a fork, then it was, time to eat.

As you can see from the photo below, then above, the eggplant eventually vanished, but the added texture and subtle flavor I find impossible to adequately describe. It was good. If you try this with supermarket veggies, the taste might not be there, and you might not like eggplant with your beef, any which way. Well, this is not a recipe! For me, though, I have been convinced that eggplant was DESIGNED for simple beef stew! :)